Nursery / Preschool Director - Lissette O'Neal
Lissette was born and raised in Acayucan, Mexico. God brought Lissette to the United States when she was 14 to attend a boarding school and then Liberty University. While in school, she met and married Ben O'Neal and started a family. Lissette would not consider herself a great leader, but she absolutely loves kids and it is her passion to serve the Lord by loving children and their families. Lissette is part of the teaching team that guides the preschool aged children (ages 3-5) at EBC as well as directing the care of the little ones (infants -2 years) in our church.

Women's Ministry Lead - Liz Jones
Liz is a mother of two boys and has been married to her husband, Aaron, for 13 years. Liz committed her life to Christ when she was in High School. It is her desire to teach women about their value as God's creation, to equip them through study of the Word, and to help ladies use their God-given gifts to bring light to a dark world. She believes that a women's ministry is not a program but a fellowship of women who understand their need for God, and each other. Liz strives to be a Godly wife and a loving mommy.You can find her most days laughing at the antics of her boys, hanging out at the baseball field, blogging, teaching Bible study, and drinking way too much coffee. Liz has a Bachelor's Degree in Social Work and a Master's in Special Education. In addition to her ministry at EBC, she works full-time helping people with disabilities 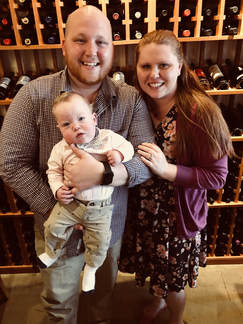 Worship Lead - Cain Jeffries
Cain Jeffries is the founding worship leader of Edgewater Bible Church. After being saved in 2009 and serving in youth ministry for several years, Cain married Chelsea in 2013 and the two were called towards music ministry as Edgewater Bible Church was being planted.
Cain’s philosophy of worship is that 1) Worship is about God more than it is about music, but music and lyrics are a powerful and biblical combination for transforming our hearts for God, and 2) As God’s people, we sing to glorify Him, and we sing together because in doing so we are mutually edified and strengthened in our faith as one church with a united focus.
Cain and Chelsea welcomed their first child, Harvey, in 2017. When they’re not leading EBC worship, they enjoy walking the dogs, spending time with family, and doing projects around the house.

Elder / Pastor
Benjamin O'Neal is the planting pastor of Edgewater Bible Church. Ben grew up in the Edgewater area and returned to the area with his family to serve God through the local church. Ben met his wife Lissette while serving in Guatemala and were married in 2010. They have four young boys; David, James, Marcos, and Roman.

​Ben began his education in business with a marketing degree. After working in the business world, Ben and Lissette felt the call to serve in full time ministry. With the help of his wife, Ben earned his Masters of Divinity from Liberty Baptist Theological Seminary. While in school, Ben served on the leadership team of a local church plant in Roanoke, VA. Before starting Edgewater Bible Church, Ben served as an intern at Riva Trace Baptist Church in Davidsonville MD and is currently serving the North American Mission Board as a church planter.